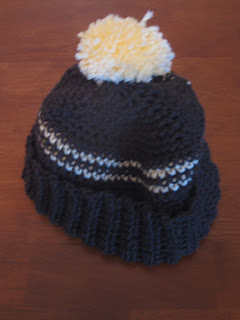 I was recently asked if I could make a poof ball hat.  Though I had never made one, I responded that I could, after all, ravelry has patterns for everything.  So I went home, looked, and found the Two Ball Crochet Hat pattern.  I liked the band of this hat.  Anyway, I started working on it, basically ignoring the gauge, just making sure that it would fit my head.  This resulted in the band being 56 rows, not 80 rows, but the hat fits.  After I finished the band I continued on with the pattern and discovered that the top of the hat is a lot looser and full of holes than it looks in the pictures.  I didn't like this, so I pulled that part out and completely redid it.  Essentially the only parts of the original pattern that I kept were the band and the poof ball.

Anyway, here's the pattern:
Entire Hat is in brown except for rows 9 and 11 and the poof ball which are in cream.

To join: ch 1, align edges, sl st through both edges across

There should be 9 stitches at the end.  Fasten off, leaving a long end.  Thread this end through the stitches on the last row and pull tight.

I made this using I Love this Yarn in Brown and Cream and a J hook.
Posted by Sarah at 4:28 PM