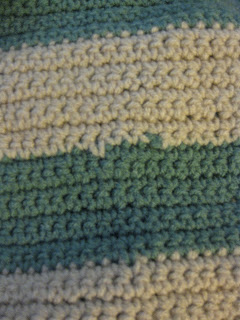 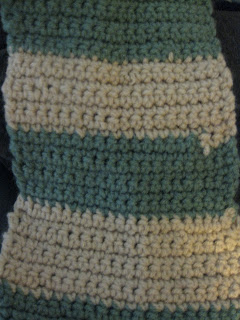 So, my friend who taught me to crochet told me to keep my first project I ever made, a scarf, because I would laugh one day looking at it.  I followed her advice and ran across it in my closet: how far I've come.

There are so many problems with it that it is laughable.  I missed stitches at the end of some rows so it shrinks as it goes.  I noticed one of these problems and attempted to fix it and ended up not having enough of that color yarn to finish the row so it changes colors in the middle of a row.  I tried to fix the shrinking problem as I went, so it also grows: the beginning and end are wide and the middle is narrow.  Another problem is that I made it out of Red Heart yarn which makes it scratchy so I would never want to wear it.  It is made entirely out of single crochet which does not help with the stiff and itchy aspect of this scarf. 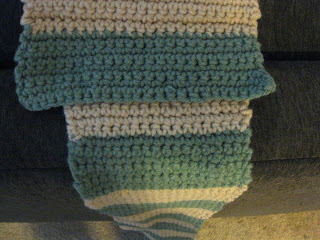 The first picture shows general mistakes in the stitch, visible at the color change.  The second shows where I changed colors in the middle of a row.  The last shows the difference in width between the middle and the end.

It has been a while, but I think I chained 25 to start this and then 8 rows of each color repeated to make it.  If anyone wants to duplicate this, that is the basic pattern.

I am glad that I kept this because it shows how much I've learned and serves as encouragement to those trying to learn.
Posted by Sarah at 1:18 PM