If you're like me, you've wondered why people would bother to make their own socks.  I mean, comfy socks are actually inexpensive, so what's the appeal?  At the same time, I've been curious about them, intrigued actually.  So I was on pinterest and saw some really cute boot socks, that you would wear with your really cute boots.  I followed the pin and saw that they were $32!  I'm not going to pay that much for a pair of socks, but I had some sock yarn in my stash and I did a ravelry search to find a pattern.  Here's what I found: Knee Socks in Crochet. 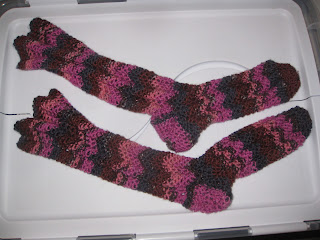 It's actually pretty easy to follow, though I did modify it a bit.  The pattern calls for a J hook, but I wanted to use my sock yarn and on the package it said to use a D hook so I used an E hook.  Also, because I was using thinner yarn, I had to do more rows to make them fit my feet (I have size 10 feet).  Anyway, I had to add 2 extra rows to the bottom of the sock, so round 21 is really round 23.

Also, I did not cut the yarn after chaining 12 and attaching it for the heel.  I simply continued on with the barrel of the sock.  When I had a complete round of gray at the top of each sock, I cut the yarn, wove in ends, and went to work on the heel.  For the heel, I basically followed the instructions, but honestly, from making so many stuffed animals, I know almost instinctively how to close up a hole to my satisfaction, which is really all the heel is. 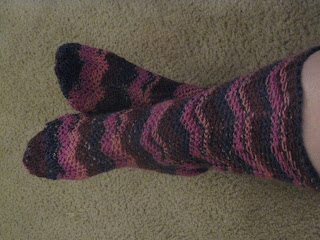 So now I have a pair of socks to wear with my boots, and it only cost me two skeins from my stash.  I do not recommend these for selling, because they take way too long to make.  To make the pair I spent at least 6 hours.  However, they would make fairly inexpensive gifts and with good color selection, could be for both guys and gals.  It would be difficult for the recipient of a pair of lovingly crocheted socks to properly appreciate the work that goes in (and it's a lot), so be careful who you bestow your masterpiece on.

I made these with Patons Kroy Socks Stripes yarn in Mulberry Stripes with an E hook.