Got a story for you!  Last spring I decided to make a baby blanket for a friend, but I had to have it done in time for me to take it with me on the plane in less than a week.  I had been crocheting for about a year at this point, and wasn't as fast I am now, so this was a problem.  Another issue was that I was using a G hook for this blanket.  I use a J hook for just about everything, so this was a departure for me.  Added to that was the difficulty in the pattern I was using.  It was the Little Snowballs pattern and it has an odd stitch in it.  Anyway, all of this combined to make my hands hurt dreadfully.  It got so bad that even when I wasn't doing anything they still hurt.  Crocheting aggravated it further, but I just couldn't put down my hook long enough for my hands to heal.  This went on for a full month. 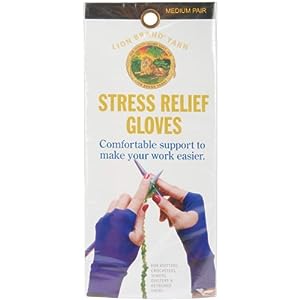 At this point I was willing to try just about anything, so when I saw these stress relief gloves I decided to give them a shot.  I didn't expect them to work; I still don't know why they work, but they do!  They had an amazing effect upon my hands.  Initially I slept with them on, and I'd wake up and my hands would actually feel great.  Not just not in pain, but noticeably good.  Within a very short time my hands were feeling good again, and I could crochet without pain.

I highly recommend these gloves to anyone with hand pain, or anyone in general because they actually work!  I wear them whenever I crochet because I want to prevent that horrible pain from ever coming back.  It's been over a year since I started using them, and I've not had a problem.  I'm also more conscious of when my hands start to hurt.  I've found that I can crochet about twice as long if I wear these gloves than I could without them.  However, they do wear out, and by that I mean, they stretch out, become looser, and aren't as effective.  I think I've gone through 3 pairs in a year, so they last for a while.  The more you use them the quicker they'll wear out, so if you don't crochet like crazy like I do they'll last longer for you.

I know that Joanns and AC Moore sell these gloves: "Lion Brand Stress Relief Gloves".  Last I checked, they were $15 at Joanns and $22 at AC Moore.  With a 50% off coupon, they're only $7.50 at Joanns and they last for months.  You can of course buy them online, but you really need to get the right size.  There's a sizing guide on the back of the package that's really easy to use.

Since they are bright blue, fingerless gloves, they look a little odd to most people.  It seems like every time I use them around other people, I get asked about them.  People are curious about them.  There are of course, other brands of these gloves, but I have only tried Lion Brand's and I know they work.  Plus, the Crochet Dude's version make it look like you have tattoos of their logo on your hands, which I think looks tacky.

I thought this was an appropriate time to bring these gloves up because making the Speedy Afghan in only 6 days was something I never could have done without these gloves.  My hands would have given out and made it impossible to do this.
Posted by Sarah at 3:09 PM