The stereotypical item to crochet is a doily.  Doilies today serve little purpose: they're just decorative, and very few people have any use for them.  Therefore, I never thought I'd get into making them.  Then my friend Lynnette told me that they were her favorite thing to make, or at least, thread crochet was here favorite.  I've always liked making blankets, with my trusty J hook, but figured I'd see what all the fuss was about.  I made several attempts and just could not get into it.

I worked on a doily in maroon, because that way it'd at least be an Aggie doily, for months more than a year ago.  It was tedious, stressful, and somewhat painful to my hands.  Reading doily patterns takes some getting used to, there are some tricks to it that I didn't understand, which made me have to improvise because I read the pattern wrong.  Also, you can't really do anything while working on one because the pattern changes every round.  This attempt ended when my roughly three month old puppy discovered that the ball of thread would roll, and proceeded to play with it all over the living room, tangling it around, under and through the couch and other furniture, pulling out hours of work in the process.  At that point, I just gave up and haven't touched it since.

The main reason I don't like doily thread is that it's so small I can't really see my stitches, and working with a size 5 hook literally hurts my hands.  So, I decided to try the size 3 thread, which is ironically bigger than the size 10 thread, working with an E hook.  The results were okay: my hands didn't hurt, I could see what I was doing, but it was impossible to make things small.  I wanted to make butterflies to put on clips for little girls hair, but they were just too big. 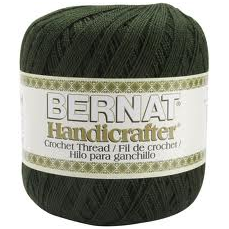 Then a few weeks ago, while perusing the yarn selection at my local Joann's store, I ran across something interesting: size 5 thread!  Size 10 was too small, size 3 was too big, so maybe size 5 would be perfect.  It was Bernat Handicrafter Crochet Thread.  I bought some purple, Orchid, and green thread, fully expecting it to sit in my stash forever, because I thought I'd never get around to doilies when I had afghans to make.  Anyway, I did get around to it, rather quickly actually, so that I wouldn't forget, and I love this thread!  You can see your stitches, it doesn't hurt your hands to work with it, and it's not too big.  I also bought a size 5 hook with a bamboo handle to use for this, and the bamboo handle makes a huge difference. 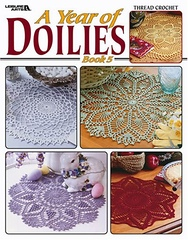 I decided to give my one book of doily patterns, A Year of Doily Patterns: Book 5,  another try, and started on the May doily.  I mentioned earlier that there are some tricks to reading doily patterns.  One of the most important is to not turn unless you're specifically told to do so.  Well, I didn't know that, so I turned after every round, which made the pattern not line up.  To compensate, I had to reinterpret the pattern for every round, which led to some problems.  It wasn't until I had actually completed the entire doily, and was taking pictures of it and generally admiring it, that I realized I couldn't fold it properly.  Nothing lined up.  Then I counted, and somehow I had ended up with 7 pineapples instead of the 8 that should have been there.  In any case, it lays flat and I like it, so I just have a slightly skewed doily now. 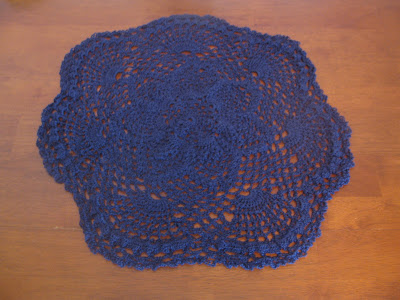 Making that doily only whetted my appetite for doily making.  I went out and bought more of the thread, and searched ravelry for more patterns.  I've now made several (I'll post more of them later), and will probably continue to make these beautiful but pointless creations.
Posted by Sarah at 3:35 PM

Email ThisBlogThis!Share to TwitterShare to FacebookShare to Pinterest
Labels: Doily