Today is the last time this century that the date is repetitive.  12-12-12 has special meaning to Aggies because of the 12th Man.  At 12:12 central time, the War Hymn was broadcast on the radio and played everywhere.

In case you don't already know the history of the 12th Man here it goes:
On January 2, 1922, in Dallas, during the Dixie Classic, a forerunner of the Cotton Bowl, an Aggie, E. King Gill was called from the stands to suit up as a substitute.  Hence the phrase, 12th Man.

So basically, the Aggie football team was reduced down to 11 uninjured players.  There are 11 players on the field at any time, so if anyone else went down, there wouldn't have been anyone to replace them.  So, they called a student out of the stands to fill in as necessary.  No one else was injured, but he stood on the sideline the rest of the game, ready and willing to help his team.  Since then, the entire student section of Texas A&M stands for the whole game.  We are the home of the 12th Man. 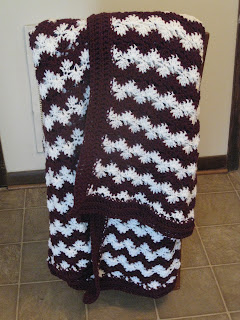 On this most auspicious day for Aggieland and Aggies everywhere, I think it's an appropriate time to unveil my latest Aggie afghan.  I'm extremely happy with how it turned out, and I plan on keeping this one. 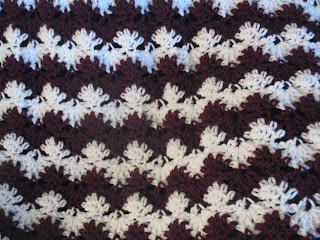 Color pattern:
1 row white, (2 rows maroon, 2 rows of white) repeated, ending with 1 row of white.  The border is all maroon.


I made this with I Love this Yarn in Aubergine and White with a J hook.
Posted by Sarah at 3:22 PM